China is the second largest economy in the world, largely due to its focus on manufacturing alongside a low-price strategy which has transformed the country into the world’s manufacturing center. Many Chinese industries have benefited from this rapid economic growth, including aviation. The quick development of this sector has encouraged the expansion of their flight offer through the construction of 20 additional airports by the year 2020. 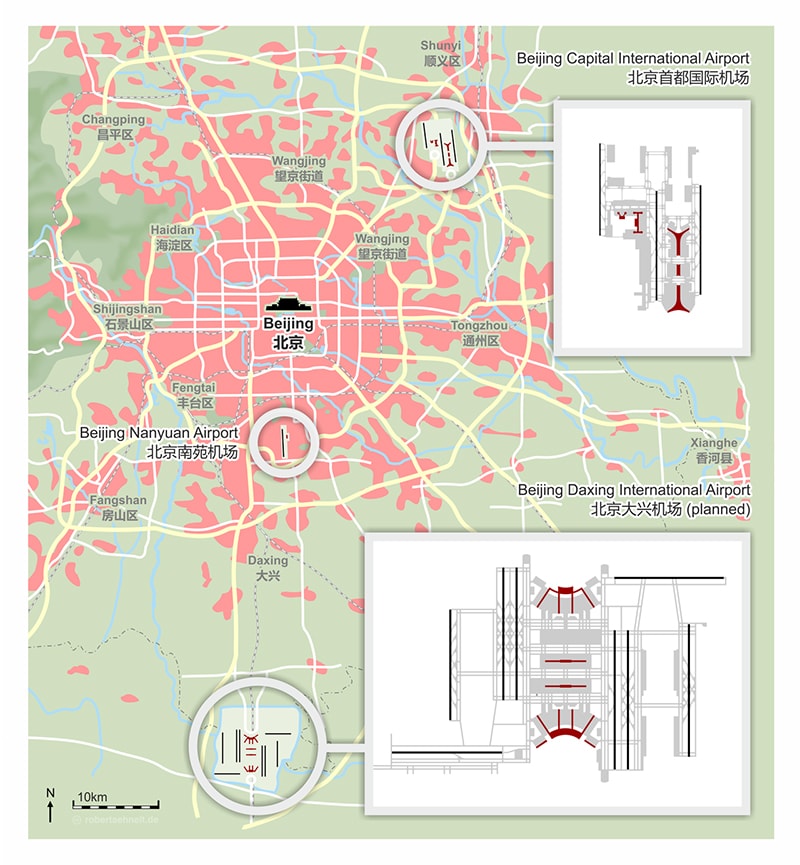 On the other hand, this rapid growth has not only brought positive results. Beijing currently presents a challenging traffic problem as its current international airport has been operating very close to its maximum capacity for the last five years, leading to constant criticisms from the lack of appropriate infrastructure and the endless delays experienced by travelers. The chaos at the current Beijing International airport is not only affecting the Chinese tourism industry but also generates substantial economic losses from the insufficient supply of flights, overbooking practices, and delay issues.

Fortunately, the Chinese government has decided to take action and remedy the situation by building a brand-new airport in the southern suburb of Daxing, alongside the border of the Hubei province. Unlike cities such as Paris, London or New York, which already have one or two additional airports as a tool for segmenting and managing the demand for flights into regional and international, the Chinese project is different. Beijing Daxing International aims to act as a new transport center in the city, making it the first capital with two main transportation hubs for flights. The project is revolutionary and ambitious as it also aims to become the world’s largest airport in the future. 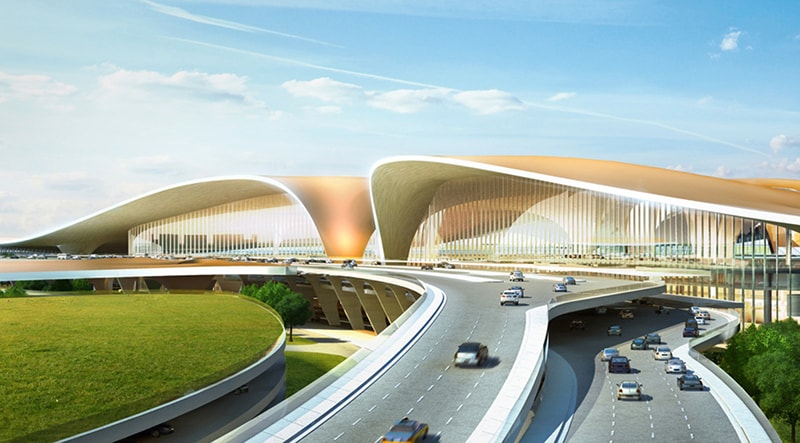 Expected to serve Tianjin, Beijing, and Hebei, the 2,680-hectare airport is projected to become the world’s biggest aviation hub with a final capacity exceeding 100-million passengers, surpassing Hartsfield–Jackson Atlanta International Airport as the busiest airport in the world. Consulting firm NACO conceived the airport master plan with a strong focus on efficiency. It is expected to have seven runways, six for civilians and one for the military, alongside a 78-gate terminal which was designed by ADPI in collaboration with architecture legend Zaha Hadid. Albeit its size, the project is so efficient that the farthest gate is only 8 minutes away from security clearance and the first four runways are designed to reduce delays and aircraft taxiing durations. The project is expected to have a cost of US$ 12.9 billion. Nevertheless, this budget also includes the implementation of a high-speed train in the underground of the airport, connecting it to southern Beijing in only 30 minutes.

The large airport hopes to welcome a vast number of airlines from all over the world including the SkyTeam alliance which englobes China Eastern and China Southern, two of the largest national carriers. The two Chinese giants will be allowed to handle up to 40% of the traffic from this airport, raising concerns from Air China who currently handles passengers in the current Beijing International Airport. Nevertheless, due to the strategic location close to the city center, the existing airport at Beijing offers a great advantage to business travelers as the South offers a less business-friendly environment, presenting constant traffic jams that lengthen travel time between the airport and the city.

The project was first envisioned in 2008, but construction only started in December 2014. To this day, the main structure has been completed yet; the airport will only open its doors to the public in 2019 offering an initial capacity of 45 million travelers. However, this number will increase with time as a 72 million capacity is expected by 2025 before finally reaching its ultimate goal of 100-million. 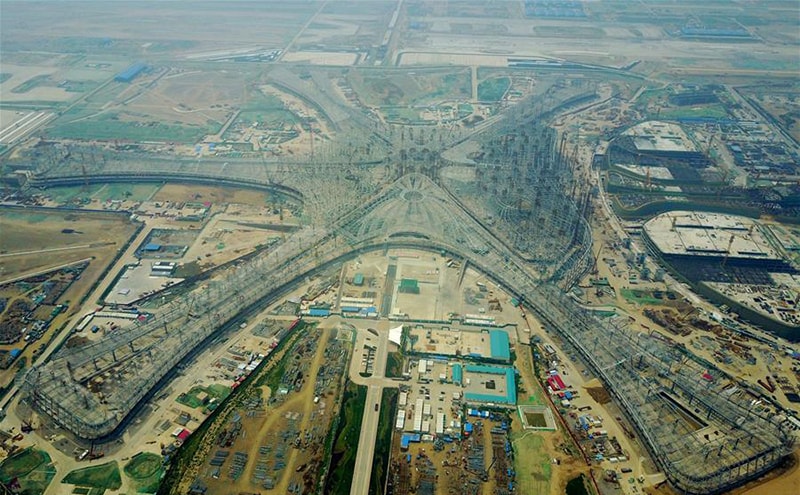 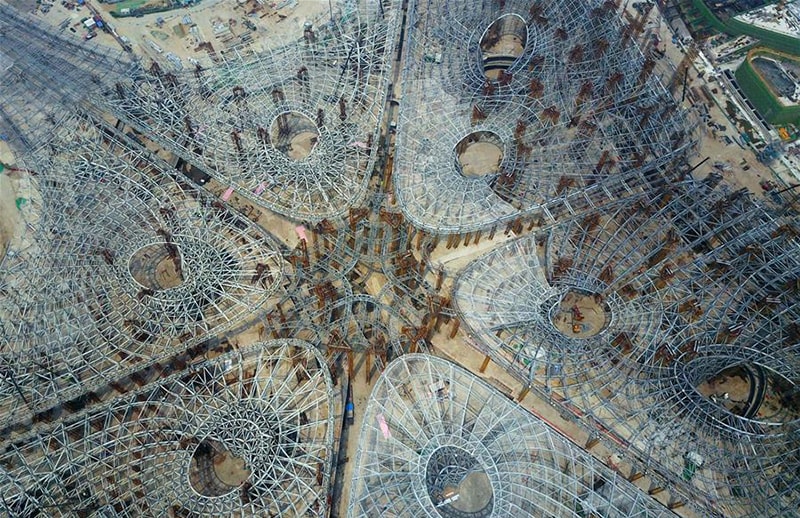 The project is valuable for everyone as it will grant Chinese airlines access to North American air routes and vice versa. However, Beijing Daxing International is exceptionally advantageous for China Eastern as it will enable the airline to become a major player in both Shanghai as well as Beijing for Europe and North America. On the other hand, China Southern is also highly focused on growing its customer base in the new airport with plans of deploying over 200 aircraft in the new location by 2020, only a fifth of its expected fleet once the airport is completed. 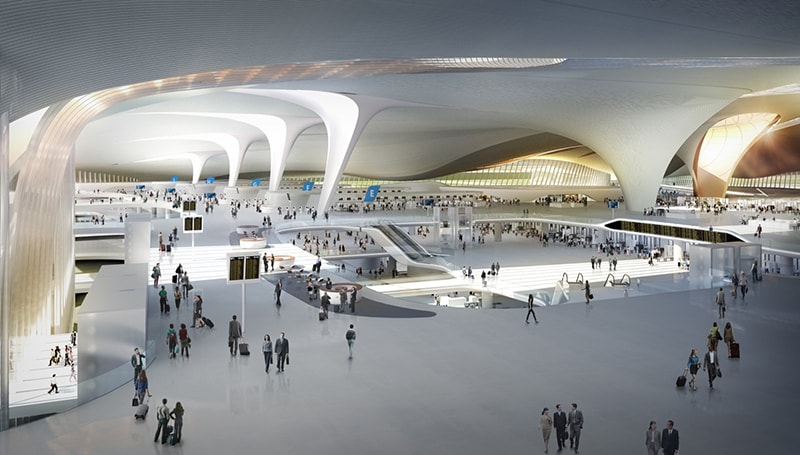 Unfortunately, this massive expansion may not solve all of China’s air traffic problems. Chinese airspace is highly restricted from the high-priority given to military planes which lead to limited available air space for commercial uses. Nonetheless, some experiments allowing the share of air space between military and civil aircraft have already started with very positive results. The Chinese government appears to be committed to improving the aviation industry through different airspace reforms that would expand the previous experiment to larger cities such as Beijing and Shanghai shortly.

In conclusion, China seems to continue growing in a vast number of industries. Although we won’t be able to see the airport completed for a long time, we can be confident that it will become a major transportation hub for the rest of the world, linking the Chinese capital to Europe and the U.S.